I have blessed to have the opportunity to travel to Santa Rosa de Copan, Honduras for five weeks.

I have been fortunate in my life to spend a nice amount of time in 2 different Spanish speaking countries. The first time was in Mexico when I didn't speak a lick of Spanish. I learned a ton but was definitely far from fluent. Much of my time was spent feeling awkward, unsure of how to speak, and sort of trapped in my head because it was difficult to convey any sort of real message to other people. That experience was great for me working as a speech pathologist because I got a tiny glimpse of what it may be like for the kids I work with who know what they want to say but have great difficulty saying it in their primary language. This time around, I know more than I did and I'm not sure exactly how much I'm learning but am confident I could hold my own in some sort of conversational Spanish class....as long as I could speak in the present tense the whole time ;) The same feelings remain: feeling awkward, unsure of how to speak, trapped in my head....but less so than a few years ago.

The kids are fantastic teachers so there is a good chunk of time we practice English (the words they want to learn) and Spanish. Most of them are pretty patient and it's all a huge laugh when we work on pronunciation. The game of, "Say ____" never fails to amuse those participating as my North American pronunciation of certain sounds is highly entertaining. I'm pretty sure I've been taught only appropriate words...by teenagers...but I can't be 100% positive, can I? The other volunteer, Tracy, is fluent in Spanish and English so it is great to have her act as interpreter from time to time.

The least I can do with folks here is use their language to try to communicate. Spanish is such a beautiful language and I have tried really hard to use it to communicate with those around me. It is way more intimidating speaking with adults but it's worth it to see them appreciate the effort...and it's worth it to give those listening a good-hearted laugh with my pronunciations as it's a great way to break the ice. Everyone I've met has been extremely patient and incredibly understanding and helpful with helping me communicate. I have been completely humbled, again, by everyone's generosity. I am happy to say that recently, I really feel like I can understand way more than I could understand when I first arrived 5 weeks ago. I'm pretty excited!

(machetes are used instead of lawn mowers for cutting the grass)

..kids at a Saturday afternoon catechism class in Ocotepeque... 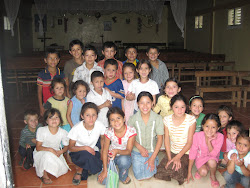 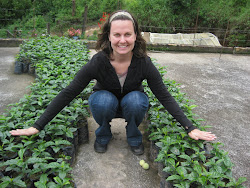 The little sisters of one of my students strongly suggested I pose like this.

Right outside their front door... 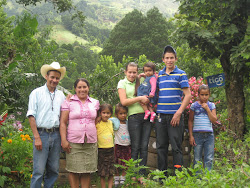 ..the family I stayed with for 3 days in the mountains of Ocotepeque